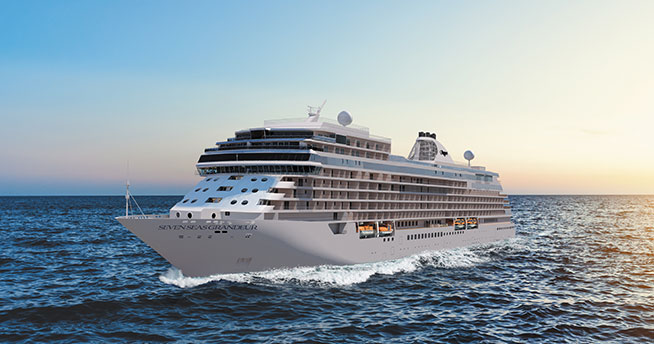 The schedule contains 21 more departures than the line’s 2023–24 season when it goes on sale on 24th August.

The length of an itinerary might range from seven nights to a 150-night world cruise.

More trips to western Europe than ever before, two 14-night Alaskan sailings, and a new ship—the Seven Seas Grandeur—have all been introduced by Regent.

Seven Seas Grandeur, the sixth vessel in the fleet, sets sail from Rome in July 2024 to begin its first Mediterranean season.

The ship will make its Atlantic crossing in August, traveling 16 nights from Barcelona to New York, where it will start its first Canada and New England season.

The ship will also make 12 trips to the Caribbean and via the Panama Canal before making its way back across the Atlantic on a 14-night trip from Miami to Barcelona.

Great Stirrup Cay, Bahamas; Seville, Spain; Valencia, Spain; and Azores, Portugal are some of the most notable ports of call.

Three sailings to the Western Mediterranean and Greek Isles mark the start of Seven Seas Splendor’s Mediterranean season in April 2024.

In May, the ship will move to northern Europe before embarking on 12 voyages that stop at ports in the United Kingdom.

The Seven Seas Explorer will run voyages with ports of call in Alaska, Asia, Australia, and New Zealand.

The Mediterranean will be the location of Seven Seas Voyager’s eight-voyage spring 2024 season, which will start and end in Lisbon.

The Seven Seas Voyager will embark on its 79-night Grand European Sojourn Grand Voyage at the end of June.

Throughout the campaign, Seven Seas Mariner will go through the Mediterranean, northern Europe, and the Caribbean.

In 2025, the ship will run the Away in Wonder World Cruise, stopping at approximately 100 destinations across five continents.

Ten-night trip from Athens to Venice marks the beginning of the Mediterranean season for Seven Seas Navigator.

In addition, it will make eight trips to northern Europe and six to the Mediterranean before making a 14-night voyage across the Atlantic.

Seven Seas Navigator will start offering excursions through the Panama Canal and the Caribbean in December.

Jason Montague, the president, said: “Our 2024-2025 Voyage Collection has been curated to provide guests the chance to experience new cultures and gain new perspectives, across thousands of nautical miles.

“With multiple new ports of call, a plethora of overnight stays in port, and our enviable inclusion of unlimited shore excursions, our luxury cruises are the remedy for every traveller’s wanderlust.”