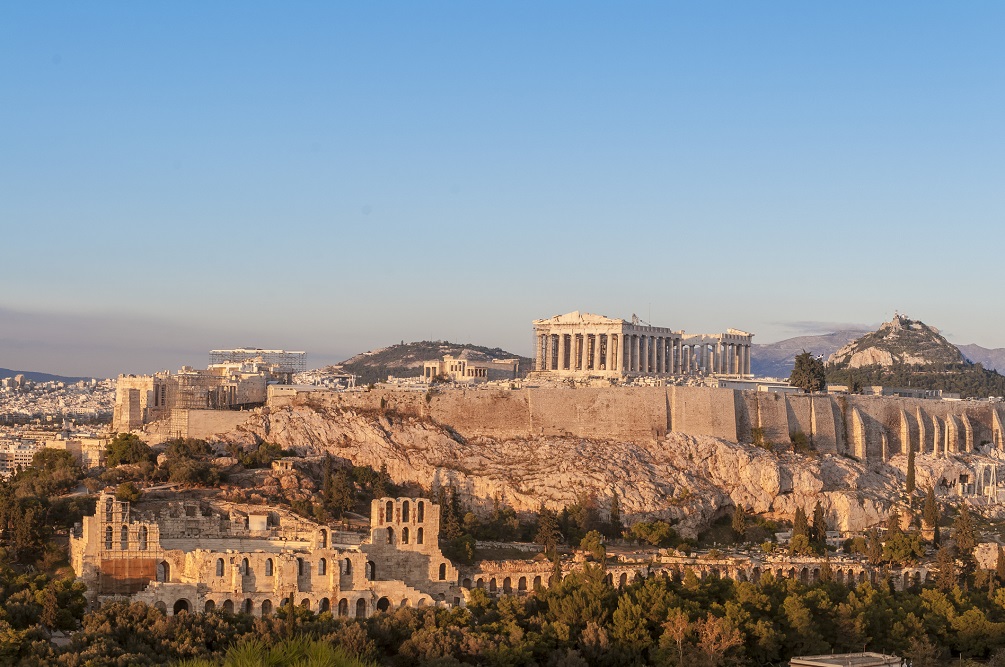 The Ancient Greeks were an advanced, intelligent society with a long and fascinating history. The birthplace of countless legends and an influential era in European growth, Ancient Greece has inspired philosophers and creatives for hundreds of years. While much of its story is now designated to books and myths, there are still some incredible sites scattered around modern Greece. These mythological monuments and ancient architectural sites have withstood over two thousand years, and deserve a visit from anyone interested in history and culture,

From the hallowed Sanctuary of Asklepios to Ancient Olympia, the birthplace of the Olympic Games, here are the amazing Ancient Greek destinations to visit on your next holiday.

A worthy pilgrimage for any lover of Greek mythology, a day visit to Ancient Olympia offers a chance to connect with the birthplace of western sports, theatre, culture, and religion. Discover a series of ruins, like the Ancient Stadium, the track where Olympic chariot races took place, Near the stadium lies the Temple of Zeus, an ancient monument to the King of the Gods. Also visit the Temple of Hera, where the Olympic Flame is ignited each year at the beginning of its journey to the Olympic Games. With plenty of fascinating pillars and historical structures and Archeological, Archimedes, and Olympic Games museums, there are lots for you to do in Ancient Olympia.

If you’re there in the summer, we also recommend walking 30 minutes west to visit the Floka Theatre. This amphitheater is a modern replica of the ancient Olympian theatre, near the village of Flokas. Sit in the stone seats and take in a performance of ancient Greek plays or classical concerts.

To get there from Athens, you must travel 180 miles on the A7 across the south of modern Greece. Tickets to access all the ancient sites cost €12 (€6 for children).

Once the largest and wealthiest city in Greece is Ancient Corinth now a vastly excavated ruin. Explore the historic city’s remains as you delight in the stunning setting and warm weather. See the last standing columns of the Temple of Apollo, once the pride of Ancient Corinth, dedicated to the Greek God of the sun, music and poetry, health and disease, and archery, among other things. There is also an Archeological Museum dedicated to the long history of Corinth. Finally, visit the artificial natural wonder that is the Corinth Canal. Theorized in 600BC, completed in 1881AD, this beautiful canal is a top beauty spot in the already brilliant modern Corinth city.

Ancient and modern Corinth is only an hour away from Athens on the A8. A pleasant drive, it’s not very difficult to access these millennia-old ruins. It costs only €8 (€4 for kids) for access to both the museum and the archeological site.

Son of Apollo, God of Medicine, Asclepius (or Asklepios) had many devotees throughout Ancient Greece. Developing over the centuries into a vast Ancient Greek healthcare center and temple, the Sanctuary of Asklepios is the birthplace of Western medicine. Explore the ancient site and see where the Temple of Asklepios and the Temple of Artemis once stood. Visit the Archeological Museum of Epidaurus to learn the sanctuary’s full history. Then head to the Theatre of Epidaurus, a grand amphitheater that was excavated in 1881, which now hosts

Greek theatre plays and classical music concerts. This ancient architectural marvel was specifically designed to acoustically amplify performances to reach all the seats,

Head east on the A8 for 1½ hours, then an extra ½ hour south on the EO to reach the sanctuary of Asklepios.  Tickets to access the site and museum cost €12 (€6 for children).

Standing tall over modern-day Athens, the Acropolis is the ruins of an ancient fortress and religious site. Constructed nearly 2,500 years ago, these hilltop remains are the biggest reminder of Ancient Greece’s powerful influence and mythology. Enter through the gateway of Propylaea, where stone buildings and pillars have withstood the centuries. Visit the Temple of Athena Nike, the protector, and patron of the ancient city of Athens. If you have an interest in Greek mythology, go see the old Temple of Athena, dedicated to the site where Athena and Poseidon competed for the patronage of the city. There are also many museums, both in the Acropolis and Athens, that offer exhibitions on archeology, history, and Ancient Greek culture.

While you’re in Athens, take the time to visit some of the other historical Greek sites throughout the city. The Ancient Agora was the commercial and social center of Athens, where many of Ancient Greece’s famous philosophers pondered on the meaning of life. The massive Panathenaic Stadium was the site of ancient sporting events and was restored in order to host the first modern Olympic Games in 1896. Or visit the almost fully-intact Temple of Hephaestus, a proud shrine to the God of Fire and Forges, and one of the best-maintained structures from ancient times.

Head south on the A6 for an hour to visit the Temple of Poseidon on the tip of Cape Sounion. The imposing temple was the place of worship for sailors and soldiers and anyone seeking smooth passage over Poseidon’s watery domain. Or head North-West and visit the town of Delphi, where you can find the ruins of the ancient sanctuary of Apollo and the Oracles of Delphi.