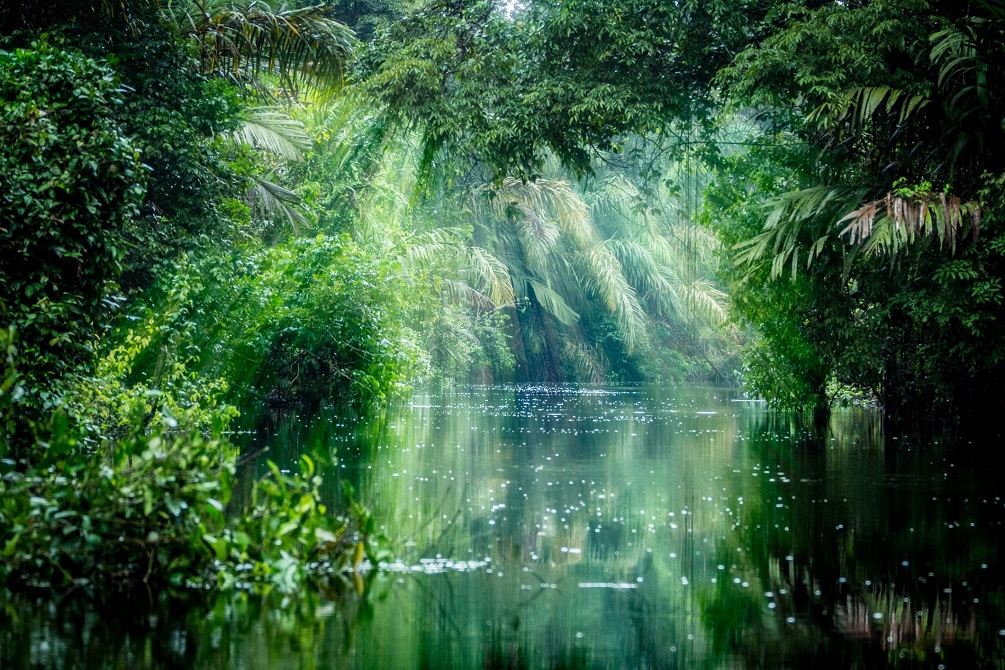 Stretching for over 77000 acres, Tortuguero National Park is one of the most important National Parks in Costa Rica. With such a vast area of land protected, it comes as no surprise that wildlife thrives within the park. Tucked away in the far-reaching Northeastern province of Limon, Tortuguero is a remote and wild place. You will find no cars, buses, or trucks here. Instead, locals must rely on boats for daily necessities: importing food, drink, and tourists.

Despite being so remote, Tortuguero remains in the top 5 most visited National Parks in Costa Rica. The very remoteness of the park is one of the biggest key attractions, as is the incredible diversity of wildlife on offer. There are no roads entering the Tortuguero region. Instead, one must enter via the intricate waterway systems or through the use of aircraft. But this is when the adventure truly begins. With 11 different habitats, from rainforest and mangrove to coastal and freshwater, there truly is something for everyone here.

The extensive network of connecting rivers and tributaries forms a labyrinth bursting with life. From the main port of La Pavona, witness an incredible array of diversity. The river systems here are wildlife havens, attracting countless species of reptiles, amphibians, birds, and mammals. If you’re lucky, you may even spot neotropical otters or Baird’s tapir.

Unlike other wildlife hotspots within Costa Rica, simply walking quietly through the jungle may not be your best option when it comes to nature gazing. To truly immerse yourself within this fascinating place, you will need to hit the water. The journey into Tortuguero would have introduced you to some of the countless species found here, however, delve in deeper, and an entire hidden world reveals itself. Take a kayak into the many tributaries and discover what lurks in the gloom of the jungle.

Not only is this a uniquely peaceful way to observe wildlife, but it also gives one the opportunity to spy on elusive creatures you will be unlikely to see elsewhere in the park. Spider monkeys, with their gangly limbs, swing for the highest point in the canopy. Caimans, relatives of crocodiles and alligators, linger in the murky reedbeds of the rivers. Let the soundscape of the jungle surround you. Listen carefully, and a world of symphonies can be heard. Croaking poison frogs reverberate around the damp undergrowth, whilst oropendola’s, a medium-sized, brown bird with vibrant yellow and blue colorations, make static-like chirps from with the tree branches. There is so much life here, it is impossible to see it all.

Departing from the shaded and humid rainforest and mangrove systems, Tortuguero also offers a marine habitat also. The 20 kilometer of coastline that encompasses the National Park isn’t the most breathtakingly beautiful beach you will come across. The wildlands and relentless oceanic currents carry debris for miles around. In fact, the currents are so strong, swimming at any time is strongly advised against. With such strong currents and the work of tidal action, much of the oceanic debris is strewn across the beach.

Although it’s not a typically picture-postcard beach, it does provide key habitat for some iconic marine residents: sea turtles. It is thought that Tortuguero beach is the second largest nesting beach for green turtles, in the world! With such a large gathering of turtles, it is easy to see why turtle tours are one of the main attractions of the area. It is not just green turtles that frequent the region. Leatherback turtles and hawksbill turtles also use the shores here to lay their eggs. Unfortunately, all turtle species in Costa Rica are threatened with extinction, due to human-inflicted pressures. Such threats include hunting for meat and shells and poaching the eggs.

Fortunately, there are strict regulations that are trying to ensure the survival of turtles here. Many projects have been set up to record and tag the turtles of Tortuguero. With dedicated conservation work, numbers have been on the rise once more. When day succumbs to nightfall, tourists have the opportunity to witness the incredible spectacle of female turtles nesting. Although possible to see turtles lay nests during the day, the vast majority of laying occurs during the night, as this is when predation is less probable. The strict park regulations prohibit tourists from venturing onto the beach past 6 pm unless accompanied by a designated tour guide. Thankfully, tour guides are in great demand around Tortuguero, and you can often organize tours either through your hotel or the information center that is in the middle of the town.

With such a high congregation of turtles, predators are enticed to the scene. One of the most prized sightings is the highly elusive, and critically endangered, jaguar. This big cat is an apex predator in Costa Rica and has been sighted prowling the shoreline for nesting turtles. Using their powerful, crushing bite, jaguars pounce upon nesting females and deliver a fatal bite to the head.

Like many tropical environments, expect rainfall. And a lot of it. Tortuguero is one of the wettest regions in Costa Rica, with an average yearly precipitation rate of approximately 6400mm. Even in the driest months of February, March, and September, expect a rain shower or two in the afternoon. This is the rainforest, after all. Despite the rains, the average temperature rarely falls below 26°c.

Many species of jungle species have evolved adaptations that allow them to thrive in this challenging environment. One of the most employed tactics used by animals to avoid predation or prey on animals is by becoming active during twilight hours. These species will typically have large eyes and an acute sense of smell and hearing. The best way to discover such species is by exploring the jungle on guided night tours. The nighttime diversity of the Tortuguero rainforest ecosystem is staggering, with a variety of amphibians, reptiles, and mammals utilizing the darkness as a survival advantage. At night, expect to see tree frogs, sloths, and tamandua, an arboreal species related to the anteater.

Despite being one of the most visited National Parks in Costa Rica, the remoteness, and the strict inability to develop beyond regulations, ensures Tortuguero National Park remains a wildlife hotspot.