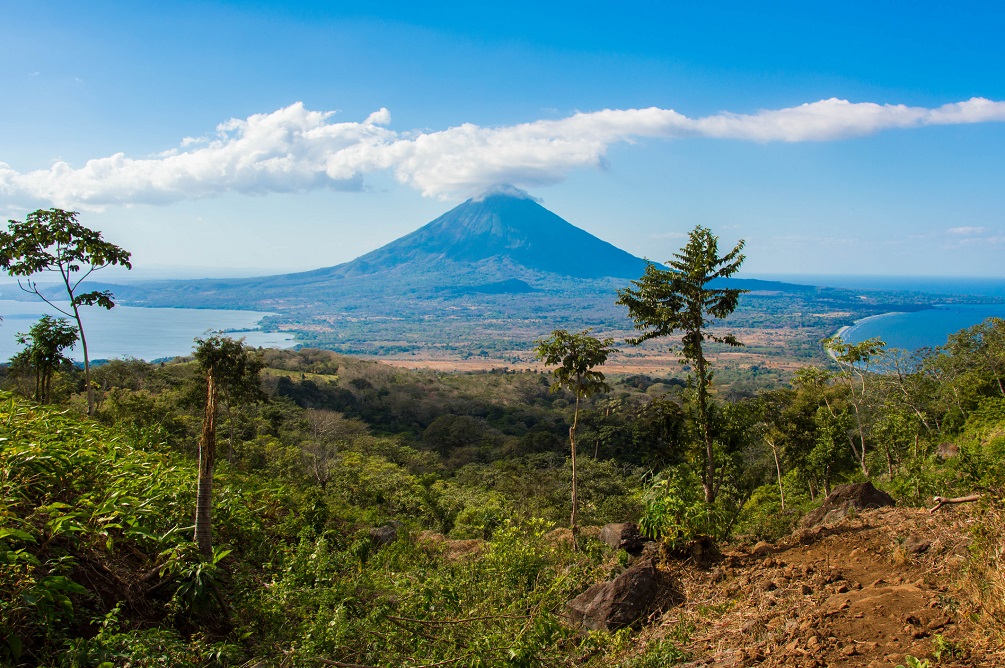 Rising from the inky waters, two mighty relics dominate the landscape. Connected by a thin strip of land, an hourglass illusion is formed. A rickety boat, if it can be called that, shuttles me from the mainland towards a freshwater island. Waves, with increasing ferocity, crash against the side of the vessel. I put on a brave face and steady my nerves. It’s just a lake after all.

In the Central American country of Nicaragua, an unexpected treasure can be found. With many people flocking to the seaside resorts, such as San Juan del Sur, or the multicultural city of Grenada, many miss out on the lesser-known Ometepe Island.

Interestingly, you won’t have to go offshore to reach this island. Travel to the Southwestern region of the country, and you will be graced by the impressive Lake Nicaragua. At a staggering 8264km², this freshwater body is one of the largest on the entire continent of both North and South America.

Formed during the Holocene period, a relatively short geological time ago, the island was fashioned from the continuous eruptions of the two volcanos that can be found here: Maderas and Concepcion. With one extinct and one active, both volcanoes offer unique sights and activities.

Getting to the island is surprisingly easy; just hop on one of the many “ferries” that shuttle passengers between the mainland and Ometepe. Disclaimer: the word ferry is somewhat optimistic. In a fleet of sturdy-looking vessels, I happen to be placed on the most unsteady looking. But, it’s either this or swim, so I took my chances.

This is when the experience truly begins. The lake itself can only be described as a small ocean, especially with the waves from the gathering storm testing the floatation abilities. It is quite an experience, and the views of the looming volcanos are other-worldly. With the perfect conical symmetry, the Concepcion volcano is particularly beautiful.

If water is not your forte, fear not. With the construction of the first airport complete, there are now options to fly from the mainland. For me personally, not only is it substantially cheaper to sail, but also more impressive. Sailing closer, details reveal themselves; Maderas is draped in lush green cloud forests and Concepcion rises close to 1600m.

This is a short guide for some of the best activities to do on the Island.

Without a shadow of a doubt, this is one of my top recommendations. Although Ometepe isn’t an outrageously large island, navigating the area by foot or public transport alone may be difficult, due to the nature of the roads. On top of this, many of the island attractions are in remote areas, again proving difficult to get to.

The overall experience of hiring a moped is fun and exciting, not to mention cheap! Ometepe is one of the few places in Latin America that still offers affordable day rates, starting from around $15 per day.

Found on the Southern slopes of Maderas volcano, you can find the famous San Ramon waterfall. The hike itself is not too strenuous, with a mix of paved and unpaved trails, making this a great introductory hike. Immerse yourself within the jungle ecosystems as you steadily ascend the slopes, watching the numerous jungle creatures flourish.

The rush of water will greet you at the top. At 64 meters high, and with vegetation clinging to every possible surface, the view is spectacular, and time seems to stand still. The cost of admittance is $2.

After a hike through the tropical forests, one can get rather hot. Fear not, Ometepe has you covered. Travel to Ojo de Agua and experience some of the clearest water imaginable. Hidden beneath the deeps of Maderas, a water spring is filtered through the subsequent layers of rock, ultimately filtering out substrates and impurities, leaving a pure body of water, filled with minerals.

Lining the crystal waters, tropical forests can be found, with an array of life. Sit back and relax, with fresh coconut water to hand. When you get too hot, take a plunge into the refreshingly cool waters. Try and spot some of the natural marine life lurking around the edges. The entrance fee is $5.

Now, this is no easy excursion. Put on the walking books and pack lots of water, you’re going to need it. This is a full day hiking to the summit, with approximate times of about 9 hours (though there are shorter trips to reach viewpoints).

Despite being able to climb both volcanoes, the most common to hike is Concepcion. Being an active volcano, you may be able to spot steam being emitted from one of the many fumaroles near the summit. Trails take you through lush jungle slopes where you can spot a wealth of wildlife, from butterflies to monkeys.

Although the name doesn’t give much away, this is one of the more famous areas of Ometepe Island. This spit of land stretches into the lake, forming a slither of the beach. From this special location, you can witness one of the best views of the Island: the lake and the two volcanoes. If you’re feeling brave, take a plunge into the murky lake. Though a word of caution: sharks and crocodiles can both be found in these waters.

Located near the main port of Moyogalpa, Punta Jesus Maria is a must-see. In the daytime it’s spectacular, but sunset is when the place comes alive. Expect to see the sky on fire, with deep reds, oranges, and purples, with the silhouette of the volcanoes at the forefront.

With much of the island life centered around physical activities, now is the chance to delve into the history of Ometepe, with its rich pre-Columbian past.

Perhaps whilst walking the many trails of Maderas, you may have spotted interesting stone carvings or petroglyphs. It is thought that the slopes of the Maderas volcano were a sacred place of the sun. Although it’s great to see such an archeological treat in its true surroundings, it is easy to see a large collection at the museum in Altagracia. Here you can learn about the geology and culture of the island.

It is easy to underestimate this island, but do not be fooled. With many exciting activities to try and exotic views to soak up, Ometepe should be the next place to explore in Latin America.