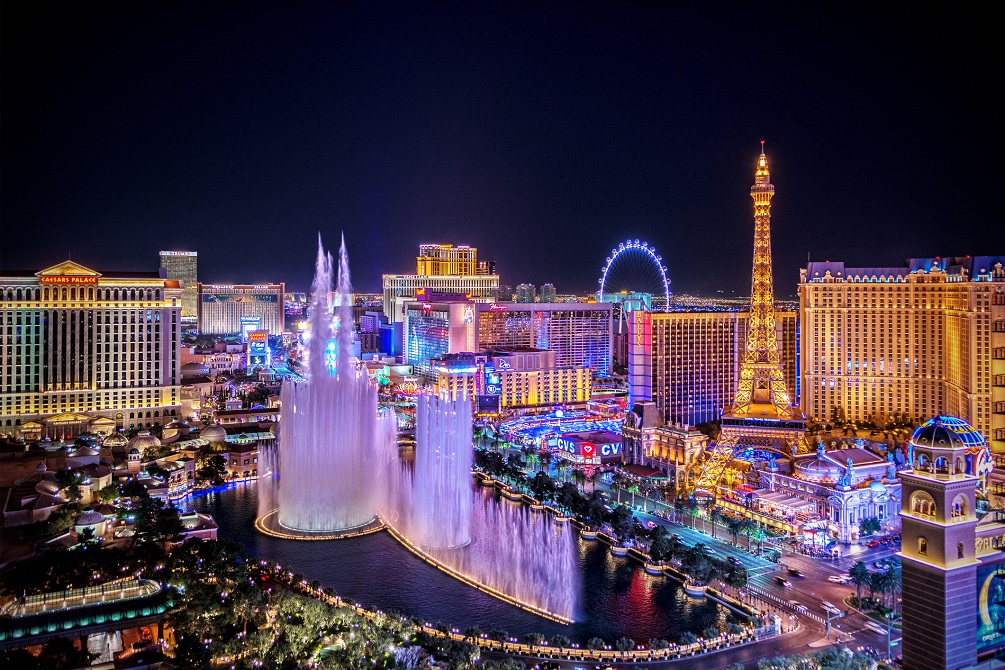 Nevada has been shaped by the forces of nature, perhaps more than any other state in the United States. Looking at satellite images of the state, the terrain appears to be a martian landscape; mostly deep canyons and huge, rock formations.

Most of Nevada is semi-arid land or desert dotted with cacti. With an average annual rainfall of 7 inches and an all-time high temperature of 52°C; it’s pretty remarkable that people live in Nevada at all. But not only do people live in Nevada, but they also thrive. Furthermore millions of people take holidays in Nevada each year.

Las Vegas: The City in a Desert

Las Vegas is the 28th most populated city in the United States. It’s amazing that cities such as Las Vegas, become established in the first place. Vegas lies in the Mojave Desert, a harsh and unforgiving climate makes life difficult, even today.

Dubai; Karachi; Cairo; Tehran; Las Vegas. It is a testament to human ingenuity and perseverance that cities can be built in deserts. The existence of Las Vegas can be attributed, in a large part, to the success of groundbreaking engineering projects such as the Hoover Dam and the entrepreneurial and live-loving spirit of the people that settled in this dusty part of the USA.

In a country that does entertainment very well, Las Vegas built itself in a way that established it as the capital of entertainment. It sits in the middle of a sea of sand, shimmering like an oasis of bright lights, exciting nightlife, and loud, eye-opening entertainment.

Of course, Vegas is known primarily as the home of gambling. It’s the place where mega-hotels and casinos compete for the attention of tourists and gamblers not only through excellent customer service but through audacious architecture and mind-blowing live shows.

Many visitors to Vegas include a stop in Vegas on their cross-continent road trip on America’s famous Route 66. Even if you’re not traveling cross-country the state of Nevada is best seen by car. A rental car makes it easy to see the sights beyond Las Vegas Boulevard, in an air-conditioned, comfortable space on your own schedule.

As a major hub of tourism, Vegas’s McCarran International Airport is served by direct flights from around the world including the UK. Rental cars can be picked up at the airport

Things to Do In Las Vegas

Visitors to Las Vegas are never short of things to do: the city takes its label as ‘the entertainment capital of the world’ seriously.

Many first-time visitors start their Vegas holiday with a walk down the Las Vegas Strip to admire the architecture and supporting light shows. The Strip is a 6.8km long stretch of Las Vegas Boulevard where many of the historic resorts and mega-casinos are located.

Some of the most impressive and well worth seeing include; The Mirage; Bellagio and its famous fountains; Caesars Palace; Treasure Island; The Luxor; New York-New York; The Mandalay Bay; and the MGM Grand.

Part of the Vegas experience, especially on the Strip, is to try your luck in one of the famous casinos. Whatever your game, from slot machines to card tables, be sure to follow some basic rules:

At 550 feet tall High Roller is the tallest Ferris wheel in the world. It gives incredible views of the strip and the wider Las Vegas area.

It started as a small troupe of street performers in Quebec, Canada. Noe the Cirque du Soleil is the world’s foremost circus act, a brand that is known and enjoyed around the world.

In Vegas, the Cirque du Soleil operates five shows across various hotels and casinos. The original product that Cirque du Soleil is best known for is Mystère which currently shows at Treasure Island.

The Mob Museum is dedicated to chronicling the efforts of law enforcement in their battle with organized crime. Under the surface, away from the lights and the shows, Vegas has a dark history.

The Stratosphere Casino is one of the most recognizable on the strip mainly due to its unique 1149 foot tower. It’s another place to go for a view over Las Vegas, and if you’re the adrenaline-seeking type, ride on the X-Scream roller coaster.

A Short Drive from Vegas

Some of the top attractions in Las Vegas are a short drive from the city.

A leisurely 45-minute drive from Las Vegas, on the border of Arizona and Nevada, is the mighty Hoover Dam. Completed in 1936 the Hoover Dam continues to harness the power of the Colorado River to meet the electricity demands of Las Vegas. During periods of peak demand for electricity 300,000 liters pass through the dam’s 17 turbines each second.

Measuring 660 feet wide at its base and 726 feet tall the Hoover Dam is an incredible sight to see.

One of the USA’s most recognizable landmarks and certainly one of the most impressive, at its deepest point The Grand Canyon drops 6,000 feet. At its widest, it measures 18 miles.

The Grand Canyon is one of the seven wonders of the world that can quite easily be seen by the astronauts on the International Space Station.

The Grand Canyon National Park is 128 miles to the east of Las Vegas, a drive of roughly 4 hours. The South Rim is the easiest area to visit from Vegas and can be done in a day trip but if possible, plan to spend a couple of days exploring this natural wonder.