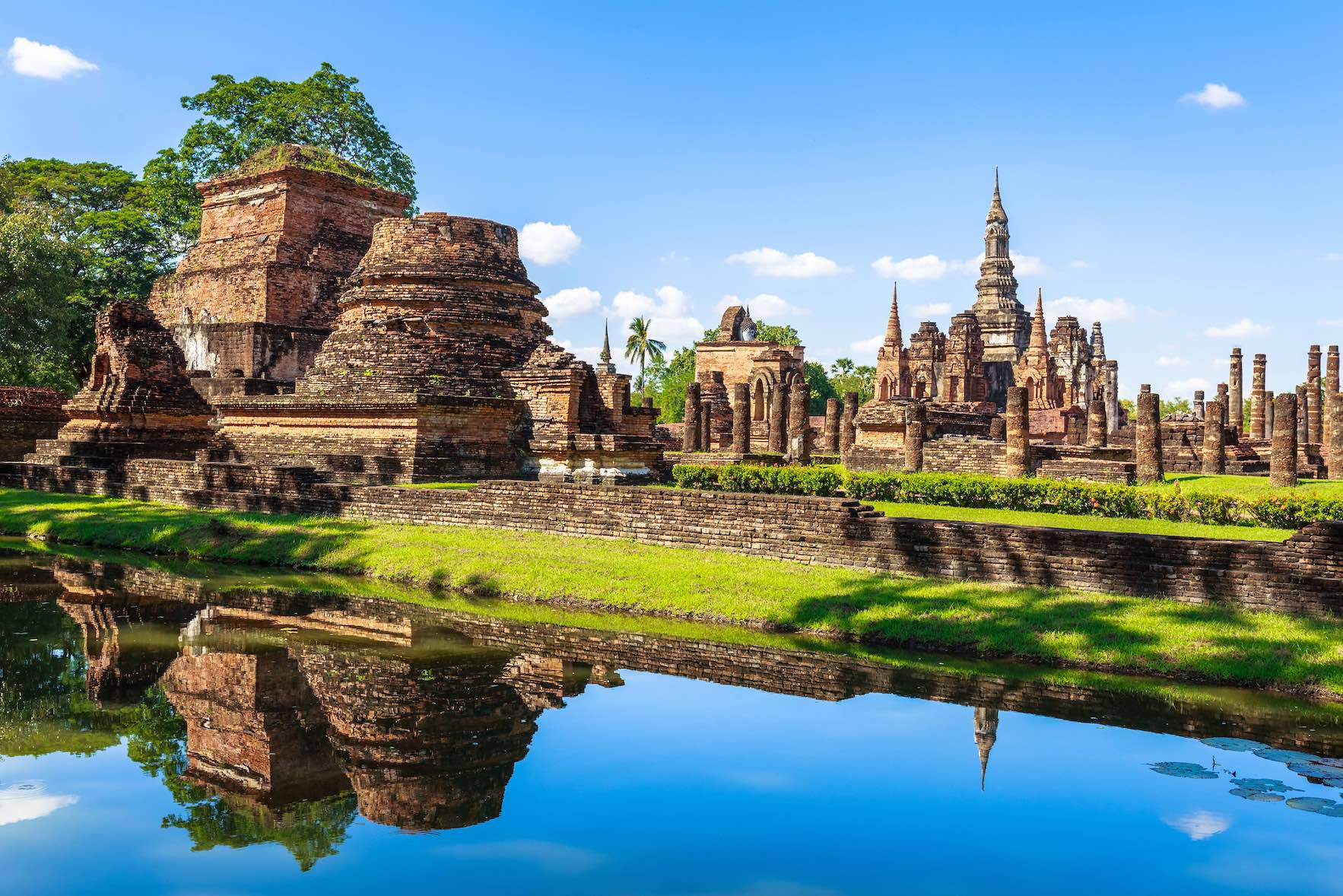 As a cultural overnight trip from your Bangkok base or as part of a longer journey up towards Chiang Mai, Sukhothai is a must-see for history geeks and culture vultures alike.

A kingdom once ruled over by the Khmer empire, Sukhothai is now a UNESCO World Heritage Site home to a series of impressive 12th century ruins spanning seventy kilometres. Temples, Chedis and Buddha statues galore, the site hosts over 190 ruins, 20 Buddhist temples and the remains of the royal palace. While Cambodia’s Angkor Wat reigns supreme as far as great civilisation ruins go, within Thailand, Sukhothai is undoubtedly the place to go!

Known as the cradle of Thai civilisation and first capital of Siam, Sukhothai is said to have been the birthplace of Thai art, language and architecture. Literally translated as ‘The Dawn of Happiness’, Sukhothai briefly enjoyed prosperity in the 13th century before being annexed by the Ayyuthaya Kingdom.

Owing to extensive renovations, visitors to Sukhothai are able to step into the past and experience the re-erected grandiosity of the original kingdom. This is quite unlike Ayutthaya, the most touristy of historical sites in Thailand, which, although more authentically preserved and conveniently located, truly pales in comparison to Sukhothai!

So you’re here: what now?

Sukhothai’s central zone is a lush park surrounded by verdant trees, ponds and, of course, vast numbers of ruins. This is where most of the largest ruins are located, in particular the grand Wat Mahathat which once sat at the epicentre of the entire kingdom, as well as Wat Si Sawai and Phra Achana, famed for its long-fingered Buddha. You won’t want to miss taking time to explore the concentric square pathways that ripple out across this site, stepping over crumbling walls and getting up close and personal with the grand structures.

Off to the north, you’ll find the sitting Buddha at Wat Si Chum as well as the original foundation site Wat Phra Pai Luang, an ancient ceramics production site which was once a key commodity for trade with the Chinese. Follow a steep slate pathway up a small hill to the west and you’ll discover Wat Saphan Hin where an impressive 12 metre tall Buddha looks out over the kingdom (not a bad view either!)

Other notable areas include Wat Chetapon and Wat Trapong Thonglang, both intricately covered in various reliefs of Buddha. The Ramkhamhaeng National Museum is also an option for more site artefacts and information.

Delve into the history of the architecture

Once sharing the belief system of the Khmer empire, early Sukhothai temples were built with a key central structure and corn-shaped prangs. It was only after Theravada Buddhism entered the kingdom, at the behest of Sukhothai’s founding monarchy, that bell-shaped chedis replaced the existing ‘corny’ style. In addition, local craftsmen also developed their own style, creating lotus-bud’ chedis, stucco-over-brick construction and graceful depictions of Buddha.

The intriguing thing about Sukhothai is that all of these architectural quirks can be seen in the aesthetic of a single temple, revealing the many layers of history to those who know what to look out for!

Tips for your visit to Sukhothai

If you’ve spent any time in South East Asia you’ll be well aware that the heat should be taken very seriously! With that in mind, you’ll want to arrive early to the park in order to enjoy the less potent morning sun. Even so, wear sunscreen, drink plenty of water and wear light clothes and comfortable shoes.

If you get scared off by the midday heat, don’t forget to come back in the early evening to see the sun set over the site; the deep reds and oranges make it the perfect spot for photographers, both amateur and professional.

How to get to Sukhothai

Sukhothai’s closest train station is in Phitsanulok, about an hour’s bus journey away from the ruins. Alternatively, to go direct, hop on a tour bus from Ayutthaya (6 hours) or from Bangkok (7 hours 30 minutes). Not only is it more than worth it (at less than 500 baht – US$16), it is one of the shorter bus journeys you’ll likely embark on in Thailand!

Once there, instead of shelling out on a number of tuk-tuk or songtaew rides to and from your accommodation, consider hiring a motorbike for convenience. This is one of the best ways to explore the site, at around 250 baht ($5) for the day, allowing you to glimpse not only the central temples but also the hidden gems based outside of the main square, some of which require a bumpy ride and a short trek to get to.

Within the park itself, another option is renting a bicycle for just 20 baht (less than $1). However with temperature often above 35 degrees in summer, the guided tram tour may seem more tempting (also priced at 20 baht).

Separate tickets are required for different areas of the park and while some areas remain free, you will likely have to pay more than one entrance fee for you and your vehicle. The price of the central park stands at 100 baht ($3) for foreigners and 30 baht ($1) for Thai nationals. Although the site is officially open from 6am – 4 pm, it seems this rule is not strictly enforced, allowing you to join the locals in a sunset stroll through the grounds.